The Jean Monnet Chair in European Governance supports Professor Gänzle’s research on the dynamics of the EU’s system of governance and its manifestations at the regional and international level. Please find below a sample of recent research contributions that are relevant to the theme of the Chair. Professor Gänzle’s CV contains a full list of his publications.

EU macro-regional strategies, such as the ones for the Baltic Sea and Danube regions, launched in 2009 and 2011 respectively, aim to improve transnational cooperation and coordination in a ‘territorially defined’ setting. In a nutshell, these strategies propose an integrated framework for cooperation involving a wide range of EU member states, sub-national authorities, regional organisations, civil society organisations as well as non-EU partner countries. From the theoretical and conceptual angles provided by the ‘multi-level governance’ approach, ‘rescaling’ and ‘Europeanization’, the book takes stock of the existing macro-regional strategies as well as processes of ‘macro-regionalization’ and explores issues of transparency, legitimacy and, in particular, effectiveness. Are macro-regional strategies helpful instrument for improving both actor policy linkages at the European, member/partner countries, and regional levels – thus fulfilling the objective of social, economic and territorial cohesion?

Stefan Gänzle, “Macro-regional Strategies of the European Union (EU) and Experimentalist Design of Multi-level Governance: the Case of the EU Strategy for the Danube Region”, Regional & Federal Studies, 27 (2017) 1, pp. 1-22.

Placed within EU Cohesion policy and its objective of European territorial cooperation, macro-regional strategies of the European Union (EU) aim to improve functional cooperation and coherence across policy sectors at different levels of governance, involving both member and partner states, as well as public and private actors from the subnational level and civil society in a given ‘macro-region’. In forging a ‘macro-regional’ approach, the EU commits to only using existing legislative frameworks, financial programmes and institutions. By applying the analytical lens of multi-level and experimentalist governance (EG), and using the EU Strategy for the Danube Region as a case, this article shows that ‘macro-regional’ actors have been activated at various scales and locked in a recursive process of EG. In order to make the macro-regional experiment sustainable, it will be important to ensure that monitoring and comparative review of implementation experience functions effectively and that partner countries, sub-national authorities and civil societies have a voice in what is, by and large, an intergovernmental strategy.

Since 2009, the European Union has developed strategies for the Baltic Sea, Danube, Adriatic-Ionian and Alpine macro-regions. These macro-regional strategies represent a new tool of European Union governance that seeks to combine the community’s territorial cooperation and cohesion policy repertoire with intergovernmental ‘regional cooperation’ involving European Union member and partner countries. By establishing comprehensive governance architectures for cross-sectoral and trans-boundary policy coordination in areas such as transport infrastructure and environmental protection, macro-regional strategies seek to mobilize European Union member and non-member states alike in promoting and harmonizing territorial and trans-governmental cooperation. Both the macro-regional strategies and the macro-regions themselves have been met with increasing interest across several disciplines, including geography, regional planning, political science and public administration, triggering questions and debates on issues such as their impacts on existing practices of territorial cooperation and their relation to previously established forms of regional cooperation. Authored by scholars based in the above-mentioned fields of study, this contribution seeks to take stock of research on the subject to date, reflect on conceptual starting points and highlight new directions for future research in the political sciences. By mobilizing a variety of actors, macro-regional strategies (MRS) of the EU have resulted in a complex and dynamic governance architecture which can be conceived as a new ‘regional institution’. We show that EU MRS lock in previously established formats of regional cooperation and thereby going beyond cohesion policy and European Territorial Cooperation. This paper identifies EU MRS as instances of experimentalist governance albeit still falling short on monitoring and evaluation of implementation. This weakness may ultimately jeopardize the macro-regional experiment altogether and, consequently, the development and consolidation of ‘regional institutions’ of the EU. 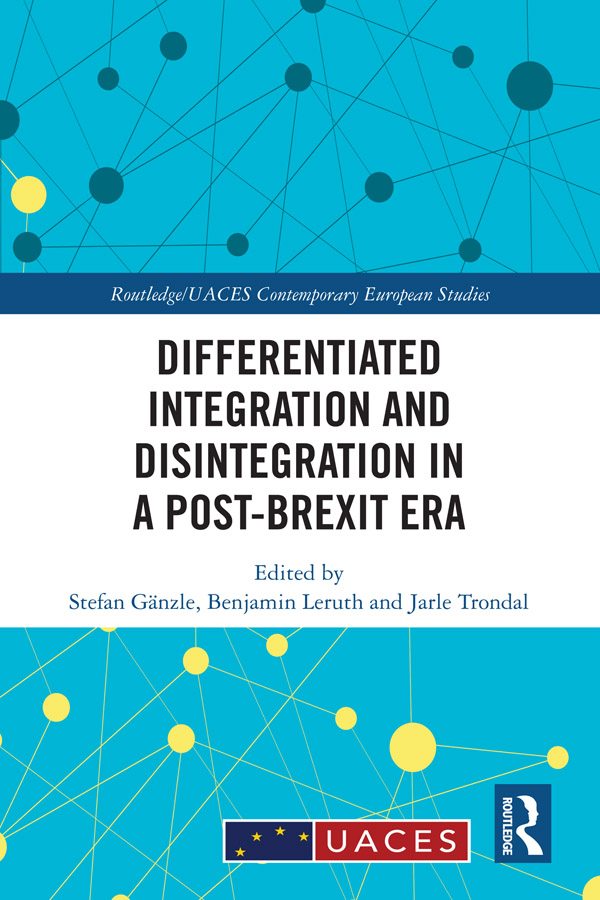 Assessing the consequences of Brexit on EU policies, institutions and members, this book discusses the significance of differentiation for the future of European integration.

This book theoretically examines differentiated integration and disintegration, focuses on how this process affects key policy areas, norms and institutions of the EU, and analyses how the process of Brexit is perceived by and impacts on third countries as well as other organizations of regional integration in a comparative perspective. This edited book brings together both leading and emerging scholars to integrate the process of Brexit into a broader analysis of the evolution, establishment and impact of the EU as a system of differentiation.

This book will be of key interest to scholar and students of European Union politics, European integration, Brexit, and more broadly to Public Administration, Law, Economics, Finance, Philosophy, History and International Relations.

The Nordic countries constitute an interesting laboratory for the study of differentiated European Integration. Even though Denmark, Finland, Iceland, Norway, and Sweden share some historical, cultural, socio-economic and political characteristics, all those countries have ultimately opted for a different kind of relationship with the EU. Whereas Finland, a member of the Eurozone since its inception in 1999, has been considered to be part of the Union’s ‘inner core’ for quite some time, Iceland and Norway, in contrast, have opted to remain outside the EU albeit closely associated via the European Economic Area Agreement. The variation of relationships has also been reflected in Nordic parties’ positioning vis-à-vis European integration in general and differentiation of European integration in particular. Broadly speaking, party families can be distinguished along traditional (e.g., agrarian, Christian democratic, conservative, and social democratic) and modern (e.g., socialist left, green, and populist radical right) ideological orientations. Although political parties belonging to both the traditional and modern Nordic party families have adopted different stances on European differentiated integration, we would assume—against the backdrop of Nordic cooperation—higher levels of transnational cooperation in European matters. Consequently, this article examines the similarities and differences between parties belonging to the same ideological family, and the extent of transnational party cooperation in the Nordic countries. Drawing on a series of interviews conducted with party representatives as well as on official party documents, this article shows that although institutionalized party cooperation mostly reflects divisions between party families, such institutionalization does not include a common vision for European integration. We conclude that the low level of partisan Nordic integration is primarily caused by domestic-level factors, such as intra-party divisions, government participation and public opinion.